When life gives you lemons

Next
When life gives you lemons 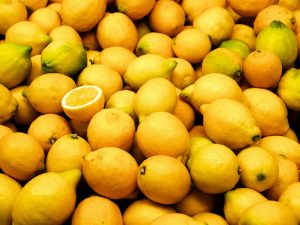 Lemon Facts:
The lemon tree is native to Asia. The juice of the fruit is 5 – 6% citric acid, which gives it its distinctive sourness.
The citrus flavor of lemons comes from the compound limonene, present both in the skin and the juice. The oil in the skin is also rich in fresh smelling aldehydes and terpenes (hence the term “zest” whereas the juice has more “fruity” esters. The bitter compounds are concentrated in the pith.
Lemonade’s origin is believed to be Egyptian. Lemon juice mixed with sugar was sold around the year 1104 in a Jewish community in the Egyptian city of Cairo.
Lemons entered Europe from southern Italy during the time of ancient Rome, though they were not substantially cultivated in Genova until the middle of the 15th century.
Romans used lemons as mothballs.
The women of Louis XIV’s court used lemons to redden their lips. Today, most women decorate their lips with fish scales.
Christopher Columbus brought lemon seeds to the New World in 1493, and the Spanish conquest helped spread their popularity throughout North and South America.
At 16% of the world supply, India’s output of lemons top today’s chart, followed by Mexico, Argentina, Brazil, and Spain.
Lemons are high in vitamin C. Vitamin C wasn’t identified and named until the 1930′s.
Lemons contain more sugar than strawberries.
Drinking lemon juice provides an impressive range of health benefits including hydration, a cleaner liver, and better digestion and metabolism.
Lemon juice is a short-term preservative on certain foods that tend to oxidize and turn brown after being sliced, such as apples, bananas and avocados. Lemon acid denatures the enzymes responsible for the browning.
The low ph of juice makes it antibacterial and a natural alternative to commercially produced hand sanitizers.
Lemon juice may be used to treat acne and as a deodorant.
It has been proven lemon helps, significantly better than vitamin E, block the free radicals that cause the signs of aging.
Halved lemons dipped in salt or baking powder may be used to brighten copper cookware.
(source kitchen cb)
By Barry|2022-09-07T17:44:01+00:00March 8th, 2013|General|